Musical adventures in Hastings and Tuscany

I’m just back to sunny Glasgow from my musical adventures over the past few weeks, which have taken me to St Mary in the Castle, Hastings for the Sotto Voce Arts Festival before a residency in the stunning Castello di Potentino in Tuscany. Beautiful weather and surroundings aside, these have been interesting experiments into different ways of performing and interacting with audiences. 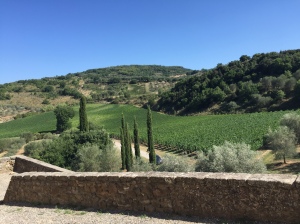 The Hastings gig was put together very last minute under the banner of the Society of Strange and Ancient Instruments. Their planned programme was to be the first performance of the material from their recent Aldeburgh residency looking at the musical experiments of Francis Bacon. Due to illness of one of the regular lineup, Gabi Maas and I were drafted in (on nyckleharpa and treble viol respectively) to play with regular “Strange and Ancient” performers Alison McGillivray (lyra viol and violone) and Jean Kelly (bray harp, triple harp).

Our ‘experiments’ mostly concerned our slightly unusual grouping of instruments (and also how quickly we could put together a programme and cross the country from Glasgow to Hastings and back!) We managed to stick to the planned theme of Francis Bacon and Gallileo, performing some repertoire probably known to Gallileo, some music by Bacon himself, alongside music by early 17th-century Italian-English composers (such as Giovanni Coperario, otherwise known as John Cooper), as well as a selection of 17th-century tunes from England, Ireland, Scotland and Sweden. Both the lyra-viol and nyckelharpa have resonant strings underneath their playing strings, which coupled with the twangy sound of the bray harp and the full-bodied triple-harp, made my treble viol feel quite weedy! The real magic of these instruments (much like instruments with a drone such as bagpipes or hurdy-gurdy) is to create an acoustic, a sound-world for the rest of the music to sit comfortably in. Once you adjust to hearing a lot of this on stage (and not much of yourself!), it becomes a rather enjoyable, if surreal experience. 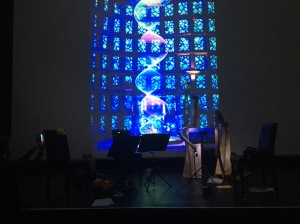 St Mary’s in the Castle, Hastings

This concert also featured the talents of Kinetic light sculptor Paul Friedlander. As well as opening the show with a lecture and demonstration of his work, Paul provided the backdrop for our concert – a light tableau, which rather than responding to the music per se, gradually evolved throughout the performance. This looked beautiful, though when my music stand light faded half way through I wished I was more familiar with the music! 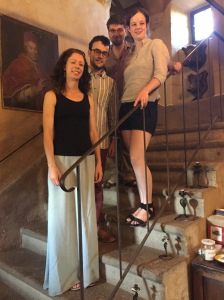 Gabi, Callum, me and Laura at Potentino

After a day or two to catch my breath (and play gigs with Erskine Quartet and It’s No Reel) we went from Glasgow’s pitiful 11ºC to a sweltering 35ºC+ heat in Tuscany, for a week-long residency at Castello di Potentino with Callum Armstrong (various bagpipes, recorders and aulos), Gabi Maas (baroque violin) and Laura Sergeant (baroque cello). Potentino is one of those places where all the right elements come together and wonderful things happen as a result. It was restored by the Horton-Greene family around 15 years ago, who now combine running the castle with a vineyard and olive grove, producing award-winning wines and olive oil. Parts of the castle date from the middle ages, including a 13th-century chapel, and the valley is surrounded by mountains, rivers, the sounds of crickets and the smell of lavender. 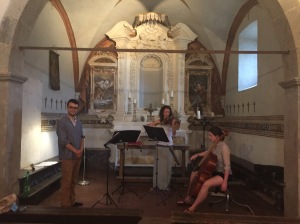 The idea behind the music at Potentino isn’t really a festival, but for musicians to become part of the culture of the place: for Alexander and Charlotte (the brother & sister duo that run Potentino), the regular concert series is only as important as us being there to rehearse and experiment with the space, meet people and make music on a much more informal basis. For us, it was incredible for our newly formed ensemble to have the time and environment to play lots of music, put together new arrangements, test out different instrumental combinations, and enjoy the delicious food and wine on offer! Most of our audience was made up of the 25 or so people staying at Potentino at any one time, with the remaining filled up by other people that lived nearby and stayed for dinner and drinks, meaning that we personally knew most of the people that we performed for (not to mention informally playing tunes after dinner, and leading some dancing on a couple of occasions). My favourite moment was when one of the castle’s dogs (Ottie, a miniature Jack Russell) started licking Callum’s foot during an aulos solo, before Callum followed the confused creature round the room. This sense of community is something we’ve been striving to achieve with West End Baroque in Glasgow, which has involved early music concerts in Glasgow bars – we’ve had one or two dogs in the audience, though I think the wine in Potentino has been slightly better! 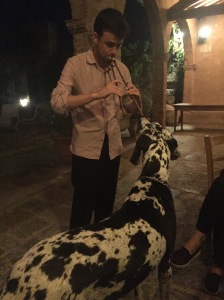